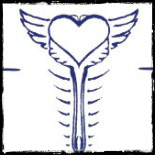 One of my massage clients recently asked me about the music I listen to that has influenced my own.

Golly, it’s a big question. Music has been such an influence in my life, my healing, my profession, my relationships, my spirituality. Music reaches it all.

I first started playing guitar when I was fifteen. For my birthday, pappy had gotten me a red-finished electric Washburn guitar with two single coil pickups and a humbucker by the bridge. She was a beauty in those young hands. I took lessons from a local blues journeyman for about six months. About the time, I was supposed to learn Stairway to Heaven, like so many of my peers, I veered off, quitting lessons and going it on my own.

I remember reading an article on Eddie Van Halen. Talked about how Eddie was the kind of player that could pick up any instrument, like a toy guitar, and make music out of it. Van Halen, Thanksgiving of 1988 was my first major concert. Up in the nosebleeds. Didn’t matter, that fella’s magic across a fretboard lit me up.

Never really tried to play like Eddie. Yeah, there was a few years of finger tapping experimentation. But, I was never gonna be him, so why bother? Finding my own way has rarely involved following the crowd.

I used to record these long improvisations and give tapes to my girlfriend. All the emotions I simply had no words for yet. I would set up a cassette recorder with a little plug in microphone from Japan. I would lay down a take, then transfer the cassette into a stereo with the speaker and the guitar amp about the same distance from the microphone. A second tape went into the recorder and I’d layer a second guitar track while the stereo played the first. I would do this three or four times to create different textural layers. A bit noisy, but still intelligible.

Understanding the layers of the body… The proximal lower extremity and the highly mechanosensing fascial wrappings surrounding muscle bellies.

When I started chemotherapy, it wasn’t long before my mobility began to decrease, only being able to walk a few blocks before my calves seized. Chemotherapy matted my fascia. All those anterior and posterior compartments became unable to glide across one another; movement possibilities diminished.

At this point, I had been playing guitar for three years, done a few four-track recording projects with school chums. Played Paint it Black in AP US History class. The instrument was becoming a tool for self-expression, for meditation, for escape, for language.

I lost all strength in my thumbs. A guitar pick, strummed lightly over strings would fall from my grasp. Button fly jeans were problematic. Nerve damage was another wonderful side-effect.

Thanks, cancer. Ya took the guitar away from me.

Healing from cancer can take years. These days, my thumbs are plenty strong, which helps as a structural bodyworker. Yep, I kept playing guitar too. Today, music and sound therapy is beginning to work it’s way into integrative cancer survivorship programs in Portland, Oregon. A pick nary falls out of my fingers any more.

I’m plunking around with a Taylor GS Mini I picked up from Portland Music on NE Broadway a month or so ago. Recorded on the iPad 2 with Multitrack DAW. This is Fire Weed.

• A massage therapist goes to NCNM
• Disrupting the positive feedback loop of pain
• Bone Broth: a rebuttal to The Onion